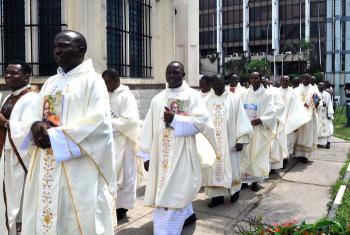 4 Catholic priests have been abducted in Delta State.

The Police dispelled earlier reports that the priests were kidnapped by herdsmen, saying that the identity of the kidnappers were still unknown.

The priests, were on their way to Benin from Warri in a convoy, when they were reportedly waylaid on Tuesday by the arms-wielding hoodlums and were whisked to an unknown location.

The state commissioner of Police, Mr. Muhammad Mustafa, who confirmed the abduction to newsmen, however assured that the kidnapped priests would be rescued.

Meanwhile, the vehicles in which the priests were travelling have already been recovered by a team of anti-kidnapping policemen drafted from Delta and Edo states.